In 2015, the global pharmaceutical industry surpassed US$1 trillion in sales, according to IMS Health. IMS Health estimates that sales in the international market will reach US$1.4 trillion by 2020. 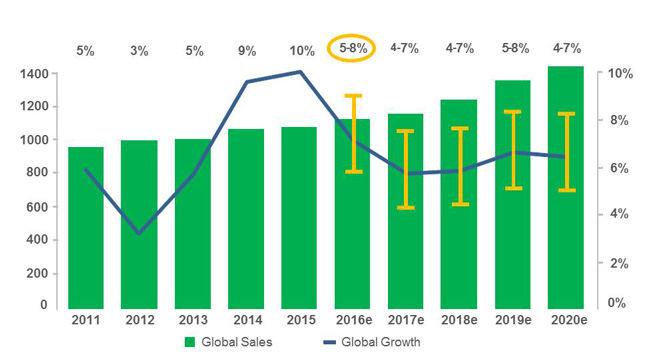 According to data from IMS Health for 2015, the Latin American industry posted sales of US$28.6 billion, an increase of 11.3% on the prior year. The following chart shows, for 2015, the largest pharmaceutical markets (retail) in Latin America in terms of total annual sales at factory price:

There are approximately 1,000 pharmaceutical manufacturers in the world, and the ten largest accounted for about 40.0% of the industry’s total revenue, according to IMS Health:

Meanwhile, Brazil’s pharmaceutical industry posted revenue at factory price of R$75 billion in 2015, which represents an increase of approximately 14% on the prior year.

The following chart shows the evolution in sales of pharmaceutical products to drugstores in Brazil since 2003, which registered a compound annual growth rate of 15%. According to IMS Health, in 2015, there were 72,500 pharmacies and drugstores in Brazil.

The following chart shows sales of pharmaceutical products in Brazil in 2015 to (i) the Retail Industry, i.e., end consumers, and (ii) the Institutional Industry, i.e., government, clinics and private hospitals. The Institutional Industry accounts for 31.0% of Brazil’s pharmaceutical industry and is growing at around 15.0% per year, driven by the private sector. 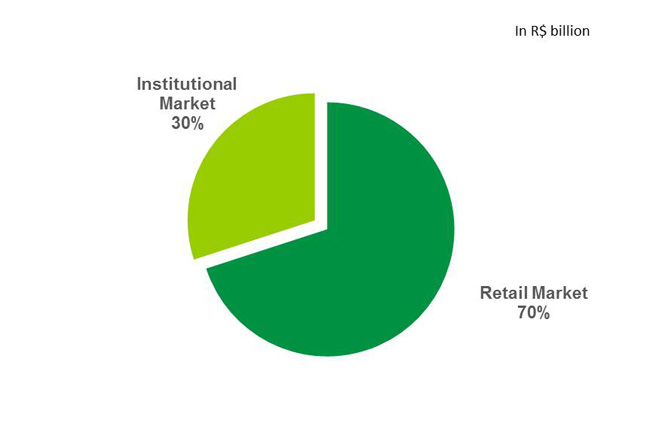 The following ranking shows the top 10 manufacturers, which account for approximately 40.0% of the industry’s revenue in Brazil, in line with the global industry.

Also known as Reference Drugs and Ethical Drugs, Branded Drugs are launched by laboratories after hefty investments in research and development, exhaustive testing procedures and approval by the applicable government agencies. Once launched, these products are protected by patent, whose duration may vary depending on the invention category and the country’s laws (in Brazil, the period is up to 20 years). Branded Drugs require a doctor’s prescriptions to be sold.

Drugs that are bioequivalent to their respective Branded Drugs in terms of dosage, efficacy, safety, potency, quality, performance characteristics and intended use. They are developed after the expiration, withdrawal or invalidation of the Branded Drug’s patent. Differences include the name, brand and promotional methods. Generic Drugs are not protected by a patent. Due to lower costs with research, development and marketing, Generic Drugs generally are sold at prices from 30% to 70% lower than those of Branded Drugs.

In Brazil, Generic Drugs account for 30% of sales at units in the pharmaceutical industry. According to data from Pró-Genéricos, based on indicators from IMS PPP (Pharmacy Purchase Price), sales of Generic Drugs amounted to R$5.9 billion in 2015 (up 11.75% from R$5.3 billion in 2014).

OTC Drugs do not require a doctor’s prescription to be sold. They are used for relief from a medical condition. This group includes drugs to treat acute conditions that are easy to self-diagnose, such as antacids, cough syrups, painkillers and cold and flu medication.

With revenue of around R$14 billion in Brazil, sales of OTC Drugs in pharmacies grew 20% in the 12 months ended February 2014, according to data from the expert consulting firm IMS Health.

(v) Specialties, such as oncological, dermatological and ophthalmological products, nutritional products, as well as prostheses, hormones and other products (jointly, “Specialties”)